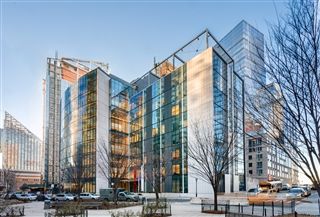 From 1892-2017, Collegiate resided at several buildings on 77th and 78th Streets on the Upper West Side of Manhattan. The former schoolhouse on West 77th Street is, together with the adjoining West End Collegiate Church, an historic landmark in the City of New York.

In 2013, the School announced that it would be moving to a new location and in January 2018, Collegiate opened the doors of its new facility at 301 Freedom Place South. It consists of an eleven-story building (nine stories above ground and two below ground), with 180,000 square feet of classroom, athletics, theater, music, art, library, dining, and administrative space. The School features common areas dedicated to each division that provide space for independent study, social interactions, and divisional activities. To learn more about our building, take a virtual tour.
In April, 2019 Collegiate’s building at 301 Freedom Place South received LEED® Silver certification by the U.S. Green Building Council®. LEED is the preeminent program for the design, construction, maintenance and operations of high-performance green buildings.
LEED® , and its related logo, is a trademark owned by the U.S. Green Building Council® and is used with permission.